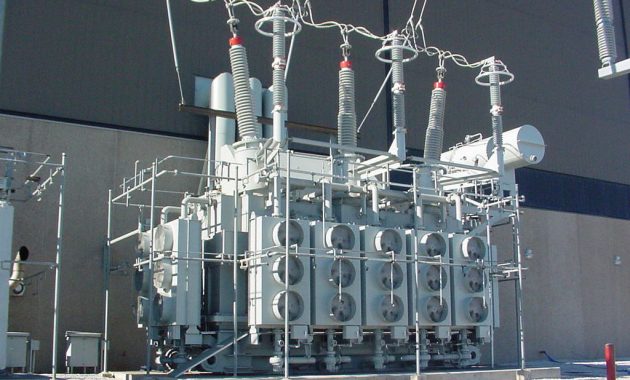 The power transformer enables the optimized transmission of electrical energy and is an essential component at each step, from generation to consumption.

Power transformers can be classified by their application type, by their position and function in the transmission and distribution networks, as well as by the type of power supply that they provide to end users who have electro-intensive applications.

A brief description of the different power transformers by application is provided in the figure above.

The Generator Transformer is an essential element of all nuclear, thermal, combined cycle or hydraulic power stations. It is also knows as a Unit Transformer as per C57.116-1989 IEEE Guide for Transformers. Generator Transformers are step-up transformers that are directly connected to the generator output terminals on their LV side, in order to increase the voltage up to he HV network’s transmission voltage; they are also called unit transformers (UT) in IEC standards as they transform all or a portion of the Unit output to the power system voltage.

As most generators are designed to operate at a voltage of between 11 and 30 kV, this is also the usual LV range for a generator transformer, whereas their HV voltages can go up the highest transmission voltages of  800 kV, and in the near future up to 1200 kV. One of the features of generator transformers is that they have a high voltage ratio.

This type of transformer must cope with voltage variations due to load rejections or switching operations. The former are often followed by generator over-excitation. Furthermore, these transformers must withstand the same over-loads that are demanded of the generator.

The basic parameters, defining the design requirements are the voltage regulation range, the voltage levels, the impedance, the MVA rating, over-excitation requirements; all as listed with their selection methods in the international guides for transformers, including, where applicable, the special requirements of transformers that are directly connected to generators.

Generator transformers usually have delta connected LV windings and star connected HV winding.The delta LV connection is to reduce the very high current passing through each phase of the LV winding (line current divided by √3), and to limit the zero sequence impedance of the transformer. The HV star connection allows graded insulation of the HV winding to be used since the neutral is usually solidly grounded, and the tap changer (if any) on neutral of HV side has a lower current rating and is thus of lower cost.

In rare cases, generator transformers can have a delta equalizing tertiary winding, or a tertiary winding that has the purpose of feeding the power station auxiliaries at a lower voltage than the generator output.

The selection between three-phase generator transformers and banks of single-phase units is a most important one for those who are responsible for buying or specifying generator transformers. Three-phase units offer more compact designs with the resulting lower real estate costs, a lower risk of earth fault or short circuit owing to the reduced number of external connections, a relatively lower direct purchase cost and lower total loses compared to banks of single-phase units. On the other hand, the lower cost of providing a spare, easier compliance with transport limitations (mass and height) together with manufacturers’ factory equipment limitations are all benefits of single-phase banks solution. This is often the only choice for power plants with very large capacity such as nuclear power plants.

Unlike transmission interconnection transformers, generator transformers are fully loaded most of the time and call for low total loss levels.

In addition, high or very high voltage and highly rated power transformers are required for base load stations such as nuclear or the largest thermal power plants. This means very specific expertise has to be brought into play. High capacity production equipment, extensive and expensive testing equipment are demanded from generator transformer manufacturers. The inherently sever loading conditions call for high security factors with respect to winding thermal gradients and cooling performances. High rated currents require finely tuned control of the magnetic field inside the tank in order to avoid localized overheating of the associated metallic parts. Finally, the very highest degrees of reliability and availability are required for these transformers since they are totally indispensable for the supply of power to the network.

The unit (auxiliary) transformer supplies the power to the power station auxiliaries that are needed for the operation of the unit. It is energized when the generator is in service.

Usually HV delta/LV star connected to provide a neutral connection to earth for the unit auxiliary system, these transformers have rating of a few MVA up to 60 MVA or more, according to the power station type and auxiliary power needs, for water circulation pumps, electric boiler feed pumps, etc.

Unit auxiliary transformers are often equipped with on-load tap changers to ensure a substantially constant voltage level to the station auxiliaries despite the large voltage variation that occurs during the start up phase. They can be specified to have three winding, i.e. one primary winding and two secondary windings. This allows limitation of the short circuit power in each of the auxiliary systems and provides a second, possibly reundant, source of suppy to the auxiliary system.

Starting transformers or station transformers supply the power station auxiliaries including the ones that are dedicated to the generator unit(s) system, during unit startup and shutdown and when the unit auxiliary transformer is not available.

They are generally star-star connected in order to pewrmit a neutral connection to earth for both HV network system and LV power station auxiliary system. They are usually connected to a HV network in the range of 110 kV to 550 kV. They are equipped with on-load tap-changers to provide constatnt voltage level to the power station auxiliaries, not withstanding HV network voltage variations as well as a wide load variation. In some cases, their provision can be dispended with, such as in gas combined cycle stations that generally have low power needs for auxiliary supplies. Unit auxiliary transformers would then supply power needed for auxiliaries, including the needs during the start-up phse, through the generator transformers. A switch of generator circuit breaker is, in this instance, connected between the generator and the LV side of the generator transformer.